When painting the car there was discussions over what colour to paint the roof, should we go white like the original scheme or should we body colour similar to the more modern cars.

To add a bit of contrast to all the blue we decided to paint it original white also known as Ivory White.  So a trip to Car Paint UK with the name and the LRC code and they mixed up 2 liters for us.   This was primed and sprayed over a weekend then put wrapped up as we weren’t finished just yet.

To add a unique look to the car we decided that the strengthening bars on the top could be painted the same blue as the body work.  So we masked up the bits in between and got busy with the brush.

After leaving to dry for the night we came back and weren’t 100% happy with the finish, so out with the wet and dry and then mixed up a small amount of blue to spray.

The spray was giving a much nicer finish so after a number of coats again left to dry over night.  When we came back to it the finish was much more uniform and smoother than the brush.

The next job was removing all the masking and see how it looked in the end.  We weren’t disappointed by how it looked.

There was a bit of running off the bars but as its the roof we weren’t that bothered, if we decide in the future to neaten it can be reverse masked and either sprayed white again or just touched in with a brush.

Then all that was left was to take the roof from the workshop to the build and store in the safest place possible.

With a couple of bolts holding it in place it now won’t fall off and shouldn’t get scratched up there.

Well after getting so close to starting the car last weekend this week we decided to look at it again.  After a bit of diagnostics with the multi meter when turning the key, we then decided to look what the brown / orange wire we had on the ignition was doing, after following it down it was found in the fuse board.

We removed the wire and then the start relay started clicking.  So with fuel stop solenoid disconnected we turned the key and the engine turned.  After this we checked all things needed for the engine to run were in place and connected the stop solenoid.

Below is a little video of the next moments.

As the cooling system has no water in we only ran for a couple of seconds, but was a really good night.

For the weekend ahead the plan is to prep and paint the roof in Ivory White as per original colour scheme.  Between coats of paint we will also be working on the doors, re skinning the near side door and stripping down and repairing the off side and rear doors.  If we get a chance we will also run the car for a couple of minutes to allow us to change the oil.

All being well Sunday night the roof will be sat on the car and it will really look like a land rover again.

Well after the haul of new parts in the last post it would have been wrong not to have started bolting them on as soon as we have time.

So a lot of time this weekend was put to getting parts on the car and see good progress, so Saturday was spent mostly carrying out repairs to the garage as there was a problem with one of the corners.  While this was happening we took all the body work off the chassis allowing better access to the chassis.

First parts to be fitted were the exhaust, after a bit of twisting and swearing we got the front pipe in place, twisting under the chassis cross member but over the gearbox one.  once in place the other sections were put in place and then all bolted together and adjusted to keep it away from anything that would cause a rattle.

We also pressed out and fitted the new seals and bearing to the front hubs but it was then too late to refit them, that was a job for Sunday.

On Sunday after a slightly later start than planned came the replacement of the front hubs they slid on nicely and were bolted up in a matter of minutes. The ends of the front hubs will be replaced in the near future with a set of free wheeling hubs that we have on a spare axle in storage.  We also bolted in the pipe from lift pump to carburetor so most of the fuel system is now completed.

Then we moved on to fitting the brake refurbish kits to each corner, so on with new wheel cylinders, shoes, springs and drums.  Within an hour all 4 were done and the wheels back on the car.

We then moved to the hand brake for which we had new shoes and springs and had the drum machined to remove the rust and give a nice smooth surface.

Well over the weekend we did a bit of work on the car, we removed the fuel tank yet again to allow access for the inner sills to be located.

Reference points for the bolt holes in the back of the sill bracket were taken, drilled in to the front of the tub panel, offered up to check the alignment and it was all good.  the same steps were repeated on the near side of the car and with the holes in a good position we then dropped the seat box in to place.

The seat box had holes in from the old car so when they were all lined up we bolted the box to the sill in the back and along the side of the car.  This then gave us position for the holes in the back on the box which we drilled out and bolted with M6 x 20 and Nylocs.

The seat box being located then allowed for the transmission tunnel cover to be screwed in and matting put in.  The other bonus was we could now fit the battery to the car and run some wire in.

I have previous purchased 2m of Red cable and 1m of Black for the battery, I went for a massively over rated cable capable of 415 Amps, shouldn’t have any issues with the cables melting all being well.

So with the battery connected it would have been wrong not to turn the key and see what happened.  The answer was nothing, when turning the key we got oil pressure light and charge warning light.  Nothing on cold start and when actually trying to crank the engine nothing happened.  So after a bit of a look around and trying of a few bits we decided enough was done for the weekend and can come back to the wiring another day.

Other issues discovered this weekend include the radiator has a hole in somewhere as when we filled it up a puddle started forming under it, this will be taken out and will get a price on test and repair, if its more expensive than a new one we might go down that route.

As a bit of a birthday present to the owner of car 1 lots of parts have now been ordered for the car which should allow for a big jump in the progress.

As of writing, the rear hub bearings have been replaced and fitted back to the car, new UJ’s have been fitted to the rear prop, the hand brake drum has been skimmed ready for refitting. and brake overhaul kits are standing by ready to be fitted. 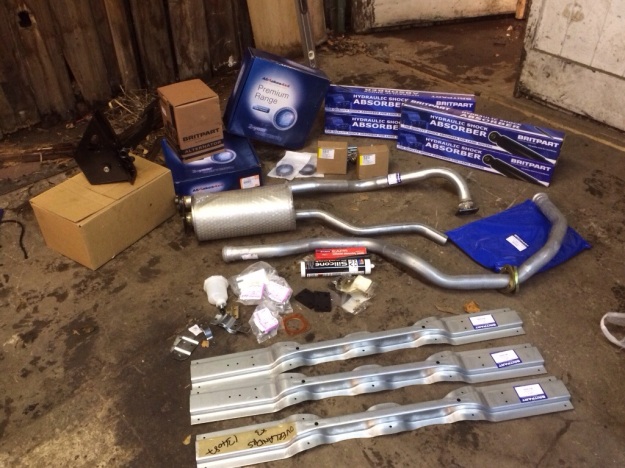 Other progress made recently includes painting of the windscreens surround, we have gone for black on this to try and tone down the green a bit.  and just to check we popped the other bits of the body on to see the shape of things to come.

We have also made up 2 repairs for the rear 1/4 panels of the tub, the bottoms of them have corroded so we have made up some repairs based on the templates for car 2.

So busy times ahead working on the car hopefully will have it further along in no time.

Well after finishing the repairs to the near side door, we too it to the car and have test fitted it.  the alignment looks pretty close which we are happy about, so far the body is pretty loose and should all come good in the end.

Other progress made this week was more painting, this time the fuel tank has had a coat of chassis black paint and is bolted back in to place.  It will be coming out again soon so we can bolt in the inner sills then should remain in place.  I have also purchased new filler hose, filler neck and breather pipe.

Also have purchased a number of electrical items, including battery cable, an x-eng x-fan thermostat and a set of Carling Contura II switches for controls of some circuits that will be added in the future.

The plan for the next couple of weeks is to prep and paint the roof, fit the x-fan and look to get the battery hooked up and test the circuits.

Well at the moment we have the fuel tank off being painted and the sills also off to allow templates for drilling.

While these bits were out the way we dropped the seat box in to place and see how it lined up with the tub. The good news is most of the holes that exist in the tub are good, but 2 don’t yet exist and another 2 are out of alignment by about 1/2 inch. So these will be drilled back through as the seat box is original.