Well as the blog hasn’t been updated in a while, I thought I would take some time and post an update.

The car was sold the tail end of 2016 as an unfinished project.  progress stalled on the car and never really got going again.

The car is still going, recently had a handbrake module replaced.  Another repair carried out by land rover was to resolve a recall issue of oil in the brake system.  This had already been done once but the issue re occurred, so they eventually sorted it again.

Since selling the Series 2 Jordan has also purchased a Disco 2 4 ltr V8.  Initially it was sold as the previous owner had put diesel in the tank and tried to start it so some basic work was carried out the car is now taxed and tested and back on the road.

Following a change of job and moving away in May 2016 I don’t have day to day involvement with my car any more, but it is still going driven by my dad on a daily basis.

At the end of October 2016 we made a small addition to the car to allow us to sleep inside it while going to watch Wales Rally GB, this involved some support bars and sheets of marine ply.  Made for a very handy night out kept out of the elements, will post some photos of this later.

Other issues at the moment with the car is the Wipac LED side lights keep blowing fuses up to 15A so more investigation is required.

No change on this yet the car is still as it was when picked up.

Still owned but currently not used.

The car previously owned by Jordan is now mainly used for spare parts.

A TD5 Auto car which has some off road modifications such as tyres bumpers, LED light bar.

Kelsey and Pete still use this car, recent additions of some 5 bar tread plate, apart from that the car is mostly used on road.

Following the rebuild not heard of any more issues with the car, still see it driving around.

Well things have been a bit manic recently so updates were last thing on the mind.

But alas here we are April 2015 and here is an update on how things are going.

Well 12 months since the rebuild finished, its MOT time again.  Car went in for its test Tuesday 7th April.  It failed 😦  The issues were headlights weren’t bright enough, the drivers door wouldn’t open from inside the car.

So all in all not too bad, but the worst item was down as an advisory but actually caused the end of the test.  A UJ in the rear prop had failed to the point where the tester wasn’t willing to carry out deceleration tests.  The prop was unbolted and the UJ’s purchased and replaced.  the prop then bolted back on and boy did it make a difference.

The door not opening was a case of adjustments on the mechanism for the handles just shortened them a bit and opening now much easier.

The headlights were the biggest concern.  As I have high performance bulbs fitted to the car when the tester said they didn’t register on the testing machine.  So reading around the subject points at a burnt out light switch causing poor performance.  The solution is to put a relay feed to the lights.  I purchased a Red Bison Boomslang from Paddockspares for £30 it was a bargain for the entire kit.  I had it fitted in no time and made a massive improvement, its a product I would recommend to anyone.

Well not much work has been done on the car since November, panels are now painted but not yet fitted to the car.  The accelerator has now been refitted and the car can be driven around.

The main reasons for this is we have been busy working on Jordan’s Discovery 2, which since november has had a number of coolant hoses as it has been loosing coolant and the pressure build up has popped them.  We have now replaced the suspected cause of the coolant loss and so far so good.

It has been plodding along as normal.  We had a bit of fun while jet washing it ready for MOT when the jet wash smashed the sun roof.  so that has been replaced and the alpine windows have been taken out and covered over.

As Matthew has decided he isn’t friends with 2 / 3 of us working on Land Rovers there will be no further updates about his car as we dont see him any more.

Yes we have been joined by two more land rovers that we can enjoy working on.

Daisy The Defender is a 2006 TD5 90, owned by some friends we have had a little bit of work to do on the car already including replacing a failed fuel pump and then adding some new bits such as chequer plate wing tops and a new bumper.  With being such a new car there shouldnt be that much to do on it for now.

Tom’s 300tdi 90, this is going to be our next big project, Toms car is in need of a new chassis, due to the amount of rust it has, we could go down the route of repair pieces but Tom fancies doing a chassis, so one has been ordered so big project ahead for the summer.  There should be plenty of updates on this one.

Well its all been a bit quiet the last couple of weeks between the injury and holidays so here is where we are up to.

Car 1 – hasn’t really changed since the engine was put in, busy looking for a clutch and other parts.

Car 2 – hasn’t changed since the engine and gearbox were refitted but will soon be getting back in to the swing and looking to put in brake lines, fuel lines and tank. Then bolt the bulkhead in to position. We will also be moving on to make the rear window sections for the body work over the next couple of weeks, then we can start spraying up the parts ready to go back on.

Car 3 – this car is now mostly dismantled and the engine and gearbox up for sale.

Car 4 – After repairing the rear diff pan, a couple of weeks ago after about an hours trip one of the core plugs decided to fail. it was replaced and again a couple of weeks later blew out again. Decision was made to replace the head gasket so this weekend was spent stripping it down, tonight we will fit the new gasket and bolt it all up again. Hopefully that will sort the issues out.

New addition to the group!

One of the other friends got a bit of the land rover bug after owning a discovery for a little while so he has now invested in a Series 3 pickup truck which is very nice, needs a little bit of work but its a runner for now.

First things first, due to computer being a bit of a pain the photos will follow shortly.

Well what a bank holiday weekend it has been, first one this year where we have actually had both cars to work on. Plus maybe a couple of side projects.

So here is the update.

Well after a bit of time with little progress this weekend has been a big jump. Most of the delays have been down to the issue with the bushes we last reported in the poly bushes being too short and a gap being in the chassis. So new bushes were purchased and then on Saturday using a fly press pushed them in to the axles and chassis.

After noticing a bit of weakness in the rear cross member welding we decided to weld in some plates to strengthen the mount, so some grinding and welding later we are happy its stronger. 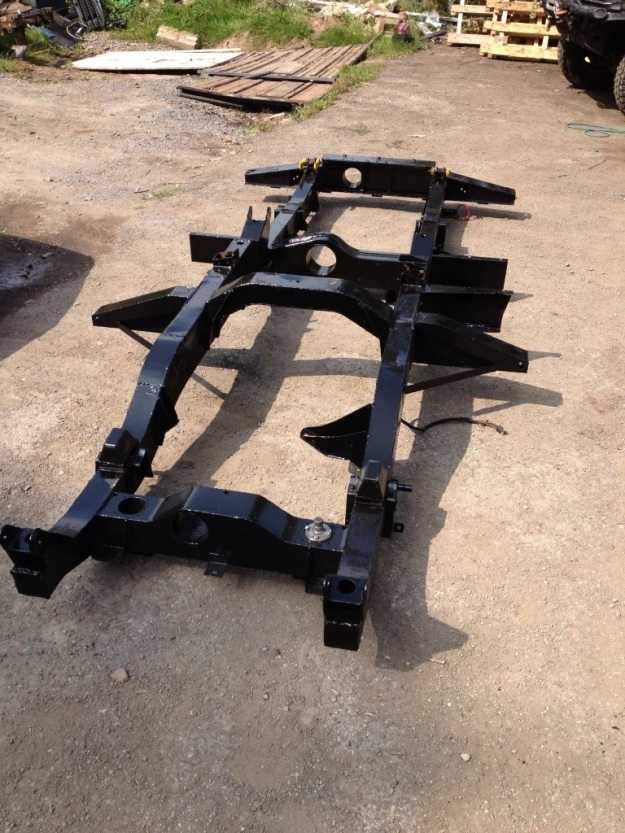 So the paint was touched up and the axles all bolted to the chassis hopefully for the last time.

Next up the engine came back to the build location after a checking over, a quick coat of green paint it was mounted back to the chassis along with the fuel tank.

Also trial fitted the bulkhead and wings from car 2. 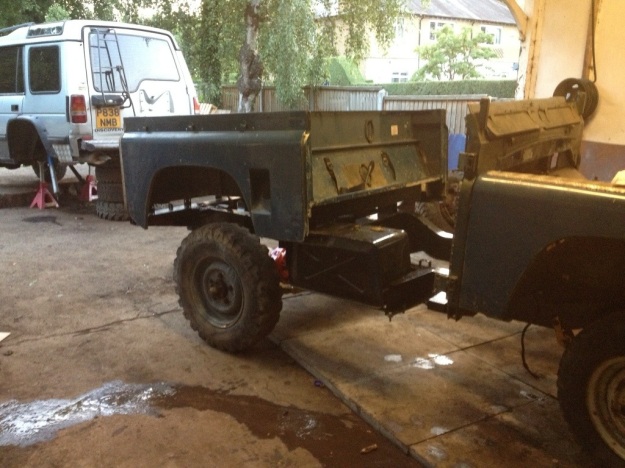 Well this week we have removed all the last bits from the old chassis, the last bits off were the A Frame and brackets, these were heavily rusted so required grinding off.

A number of parts were removed so they could go for shot blasting before refitting, these parts are :

These will hopefully be in Tuesday morning and back this week.

The axles for the car were also rubbed down and primed ready for painting before they go back on hopefully before the weekend.

While the axles were dry and not yet bolted to the car we decided to change the bearings and brake disks. Again the fly press helped pushing the bearings in to place and in the day the rear axle was done, just the front to do now.

After a bit of work this project has been put on hold for now and may be scrapped in the future, we shall see.

A silver 300 tdi disco, this is a normal road car for one of the lads, after smashing a rear diff earlier this year a replacement pan was welded in to place but had always had a little leak as it was welded in place, so as the weather was nice we decided to remove the axle and weld in the garage.

After trying we found it still leaked so the axle is still off for now so this will be on going for now.

Well car 5 strictly shouldn’t appear on the blog as its not a Land Rover and the owner doesn’t have a Land Rover but he is one of the group of friends so we are putting it on.

The car is a Toyota Celica Race car that is a just starting project, There is no clear direction yet but we shall update the blog with more information. This weekend no work was done, but we did sell a spare set of wheels that came with the car so all good for now.